At just 19 and with a book to her credit, Aveena is furthering her studies and will be sitting for her O-levels in March 2014 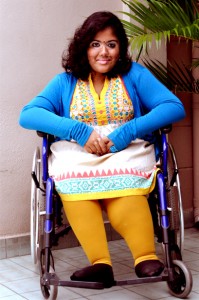 I am Aveena Devi, 19 years old and I was born with spina bifida. Well… when someone hears this from me, I can literally hear a sad violin music playing in the background. Having born with such a condition has been tough as a child and even now as the saying goes, when it gets tough, the tough gets going!

As a child of course it was difficult for me to understand what was going on and why this has happened to me but as time passed and through the help of my mum and the internet, I have come to understand my condition very well. My condition has taught me to be strong and to lead my life as an example for others to never take life for granted. My perseverance have made me be the person I am today!

Ever since I was a kid and to what I can remember, hospital was home, doctors and nurses were family and surgeries were the day-to-day chores. Not forgetting the follow-ups and the check-ups after each surgery. I have undergone 8 surgeries in total in 19 years while children at my age were in school or busy playing. Often I ask myself why I am not out there doing what they are doing but I also feel very strongly to not hurt my mum’s feelings and therefore would not want to unnecessarily aggravate my mum’s dos and don’ts. So when mum feels that being out there might either hurt me physically or emotionally, I obey her. I do this willingly because I trust my mum’s love.

Despite my condition and all the surgeries, I have absolutely nothing to complain – for God have blessed me with such an amazing family! My mum who have supported me and never left my side have always been the most inspiring soul in my life. My dad who always shown his support through his own ways and paying for all the medical treatment have always been my hero. Both my siblings have always been the best friend one can ever ask for, is certainly God’s blessings!

My early school days were the toughest days; it was not as easy as I thought it would be, after kindergarten, my parents enrolled me in a government school, with lots of difficulties. For example, the school initially did not want to accept me due to my condition. Only after my parents had written a letter to the Ministry of Education explaining the situation did the ministry commanded the school to accept me. Having been only seven years old at that time, all I wanted was to make lots of friends, but due to my appearance, students who are my age, were very sceptical on whether they should talk to me.”I can’t blame them, I guess they must have only seen their grandparents on wheelchairs not someone their age!”

After three months of being in the school, one day while studying there was a sudden alarm sound, instructing the students to evacuate from the class due to fire, and at that point my mum was not around, so having said that, the students and teachers were running out, without realising they have left me behind. While they were running, my mum was on the way to my class, when my teacher stopped her and told her to get me out, because the building is on fire, so my mum did and got me back home. Only when we got back, she explained to me what had happened and thank God! That it was just a fire drill. My mother reacted in the only way she knew to keep me safe – she stopped me from going to that school immediately.

During that period of time, it was frustrating for me not to be in school, like the others i.e. my siblings, my cousins and other children I knew of. My parents never gave up and were going around searching for a school that is wheelchair-friendly. After a few years of trying, we finally found a school through a friend, which is a Christian school that teaches the American syllabus. I was studying there for 2 to 3 years, till that had to come to an end as well, due to the fact that they shifted to a place that was not accessible for me, then I started to realise that I would just have to make the best out of what I have and move on. I then went into the creativity line and started with stitching bags from old clothes, making hand-made birthday cards and at last found my true passion, which is painting. There is a famous proverb that says “when the student is ready, the teacher appears” and that is exactly what happened, at the same place my dad works there was a art shop called “Creative cottage” owned by a gentleman called Zahir Yusof. The day I met him was the day my journey and love for art began. I also swim, which I learned from my family. I suppose that this was a good outcome considering the first swimming instructor we asked did not want to take a risk on a wheelchair-bound girl.

When I turned 16, one of the best opportunity came my way.  Friends of my father told me to write an article about myself in their in-house magazine. I was very nervous to do so, because I have no clue how to ! But thanks to a lot of help from my family, I manage to pull it off and the response was unexpectedly amazing. I had come to realise that people actually want to hear my story, and that was the turning point in my life, I was getting feedbacks that people were getting inspired by my story. Once again I wrote another article called “Disability is only a state of mind” that was published in the Star newspaper and that was when I got approached by my dad’s companies’ publishing house to write a book, I was obviously in shock, when they took me under their wings to teach me how to write a book, I was their  first intern to start of a programme called young writers programme. After six months of internship my book was finally finished and is called “What’s Your Problem?” I had written about my challenges and experiences being physically challenged. and even that was a great response, a  whole lot of people finally understood what is it like to be a wheelchair-bound person, and that people like me, do live a normal life, just with modifications, here and there. 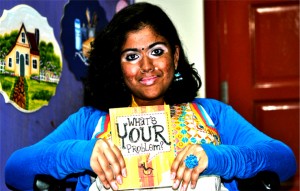 I am now 19 years old, very fortunate to say I am not back in the same school that shifted earlier, to finish my studies. In conclusion, there are a lot of people who have achieved success despite their physical limitations. These genuinely gutsy people are a great source of inspiration for everyone who worries due to the problems of life and have proved that nothing is impossible when you have the willpower to do it. I want to be one of them by graduating next year with flying colours and keep moving forward, achieving all that is meant for me. I know I can!

At the end, I would like to say anyone who lose all hope and think this is the end should understand that it is just a bend, not the end and have faith in God, He somehow will show you the way and beyond all, have faith in yourself and what you are capable of!