Growing up with spina bifida 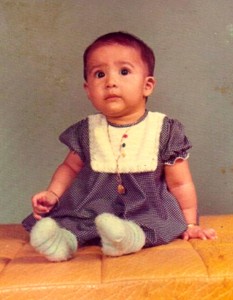 I believe in fairytales. I always have. I grew up in a magic land where Hiawatha and his animal friends live and play. I woke up every morning to Alice looking through the magical glass in Wonderland. I have my half-boiled egg breakfast in the company of Snow White and the Seven dwarfs. I spent most of my childhood in University Hospital in Kuala Lumpur, Malaysia where murals of my favourite childhood stories came alive in Paeds 5.

I learnt that if I concentrated long enough on Hiawatha’s face and his raccoon friend, I could forget that the stitches were being removed from wherever it is that they had decided to do surgery on me. I could almost feel that I was in the forest playing with Hiawatha’s animal friends to give much notice to the smell of disinfectant and the clanking of the metal forceps in the silver bowl.

I was only brought back to reality when my sister reminded me that if  I don’t finish up my eggs, the doctors will come and give me my injection. Needles hurt no matter how old or young you are. My sister used to tell me that when we were old meaning once we became adults, we could live in a magical house full of cats. There would be cats everywhere she used to tell me especially after I have had a horribly painful procedure. We would have cats upstairs, downstairs, outside the house and even in the bathroom if you like. You can hug them anytime and feel their soft bushy belly on your face and not feel any pain ever.

I live in a house with six cats now, all with lovely soft bushy bellies but I still feel pain. A different kind of pain that of being an adult, that of one which can never be taken away, not even with the best of imaginations. This pain has a name.  It is called “reality”. I believed growing up as a child that there was a cure for spina bifida, obviously, I did not know then, that it was called spina bifida. I learnt that name when I was 10 years old in the National Library of Malaysia as I watched my mother leafing through a book with funny looking children on the cover. I have always thought of myself as pretty, I had no idea why my mother would be reading books on children that looked funny. I only learnt that other people thought I looked funny when I was much older.

Hence began my obsession-once I knew I could not be fixed, that the metal bits which made my feet blister and bleed were never going to ever come off, that I had to have a bag attached to my belly forever and that I may leak foul smelling liquid when that bag gives me trouble, that I had to sit in a pram because I could not make my legs do that thing called walking- I knew I had to know why. Why I was the one who had to have spina bifida, why I had to miss school assembly because I could not carry my stupid heavy schoolbag and form a line with the other schoolchildren, why some adults stared at me openly. Honestly, when I was a child, the only thing that bothered me was when my siblings made fun of my wide gum over what I think now could possibly be one of the most brilliant smiles God ever created. I am not shy now. I was then.

“For God’s sake Bu, can you not be so over the top ?” Bibi Sajedi, my best ever mate in the whole entire world (I am sure in this life and the next) would yell at me in her attempts to get me back to reality. I would be making a face at her as she attempts to explain to me as to why she had to spend yet another lunch hour with her research group members instead of running off to Sid’s for our jacket potato and uhmmm…hot, brewed tea.

Doing a PhD in Developmental Neurobiology was not easy. Doing it in one of the top 5 universities in the United Kingdom was inordinately tough. Doing a PhD research project on “Molecular Mechanism of Adhesion and Fusion during Spinal Neural Tube Closure” was beyond my wildest dream and the best explanation as to why I was born with spina bifida. Why I was the chosen one. Why I had the opportunity to travel to London and to learn why I became me, why I insisted on entering the science stream in high school when everyone thought it would be physically too demanding on me, why my mother made me walk even though I slipped and fell again and again and again countless of times when I was four, why my mother never gave up on the need to have me in those awful metal bits with ugly shoes attached, upright and bipedal and able to do all that on crutches whilst climbing the stairs.

Bi used to always say I operated like Inspector Gadget, a French television cartoon with an inspector as the main character able to whip out any instrument to get the job done. Bibi adored me, it was obvious. I, in turn wished silently that I could work in the same lab for the rest of my life with her. It was hard having people to want to work in the same lab with me. I am pushy, demanding, obsessive compulsive over everything. Bi made me feel that it was alright being eccentric because I cared about what I was doing, that what I was doing was genuinely going to make a difference in people’s lives.

Back in the lab in Malaysia

As I am writing this, I am not sure whether all that is ever going to come true. Things do seem to be going really well now and it does appear that I am getting somewhere but the fear is there. The fear is always there. The fear of never having enough time. The fear that I would not be strong enough to finish what I started.  What if time ran out. What if my scoliosis gets worse. What if I can’t get out of bed because my back ached too much and no amount of tramadol can kill the pain even if I injected myself intra-muscularly. I never thought I would one day be jabbing my own thighs with no hesitation whatsoever but I am. I did not know then but things took a turn for the worse sometime in 2005. I was in the crucial stages of my PhD…I did not know how critical things really were until I began to vomit continuously for hours sometimes. After 6 months of being sick, I took the decision to run home to Malaysia and have myself sorted by Superman (yes, that is what i call my doctor).

Yet, I am still strong enough. Strong enough to drive to another research university an hour’s drive away, to shower and dress in the sterile garment before entering the facility, to place the microscope for hours on my lap and do work because the stools are too low for me to sit on. I somehow can do all this work. It has always been this way, right back from the beginning. This has to be the way it has to be. My life, my destiny, my hope – my legacy.